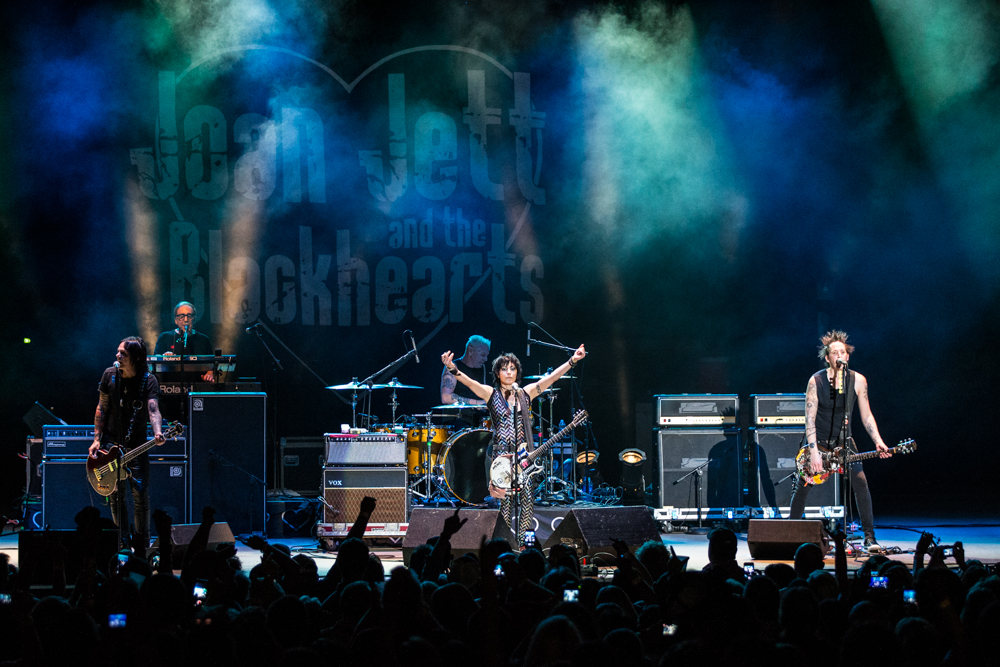 The Pepsi Grandstand got rocking Friday night as the Missouri State Fair hosted Black Stone Cherry and Joan Jett & the Blackhearts. Cloudy weather made for a perfect night for a concert, and the two groups didn’t disappoint.

A mixed crowd filed into the Grandstand as soon as the gates opened. The seating area on the track had all walks of life, from middle-aged men in polo shirts to young women in goth get-ups, and even the bros made it out decked in their tank tops, backwards hats and high socks with flip-flops.

Black Stone Cherry hit the stage with guitars blaring and the drums booming. The crowd responded in kind, with the majority of concert-goers in the track area standing at the sound of the first chord. The metal horns stayed in the air for the majority of the night as the rockers kept the tempo up from start to finish.

Throughout the set, guitarist Ben Wells and bassist Jon Lawhon were constantly moving around the stage and revving up the crowd. BSC was truly surprising. I hadn’t heard much of their music outside of a couple songs on the radio, but the energy they had on stage and the musicianship had me bobbing my head to the beat.

Jett hit the stage to a big band music track before launching into “Bad Reputation.” The crowd went wild for Jett – people were screaming, standing on their chairs, and of course singing nearly as loud as Jett was through the speakers.

It isn’t very often that I get star struck at this point. I’ve been to more than 45 concerts and had numerous meet and greets through the years. But when the Godmother of Punk hit the stage all the hair on the back of my neck stood on end and my heart started to flutter. I first heard Jett when I was in grade school, my parents had some of her music so it’s something I first heard in the late ‘80s and early ‘90s. I was totally blown away when she came out and immediately went into a song I actually knew. Luckily I was surrounded by screaming fans who were equally enthralled so no one around me noticed the dumbfounded look on my face.

The crowd screamed every time an opening riff to some Jett classics played and sang along throughout the set in a cascading chorus of voices. Guitarist Dougie Needles kept the crowd on their toes with blistering solos throughout the set. While they may not have maneuvered around the stage like BSC, seeing these legends live was well worth it.

As the sun went down and the beer flowed more freely, several Missouri State Highway Patrol officers made rounds throughout the Grandstand to ensure concert-goers weren’t having too much fun. It seemed they were primarily telling people to get off of chairs but at least one man, who had lost his shirt, was escorted out by police.

As the Blackhearts played “I love Rock ‘n’ Roll,” the audience was singing along, dancing and had their hands in the air in a blissful mass of people from all walks of life. It was truly a thing of beauty. As they played the final song of their encore, “Everyday People,” Jett and Needles went toe-to-toe for a final jam session before the group took their bow and left the stage.

Overall it was one of the most memorable concerts of my life. BSC did a great job of getting the crowd revved up and ready to rock out just in time for Jett & the Blackhearts to bring it home. I was really impressed with Jett’s performance, and it was awesome to hear songs my parents listened to when I was a kid live, and from the original artist.