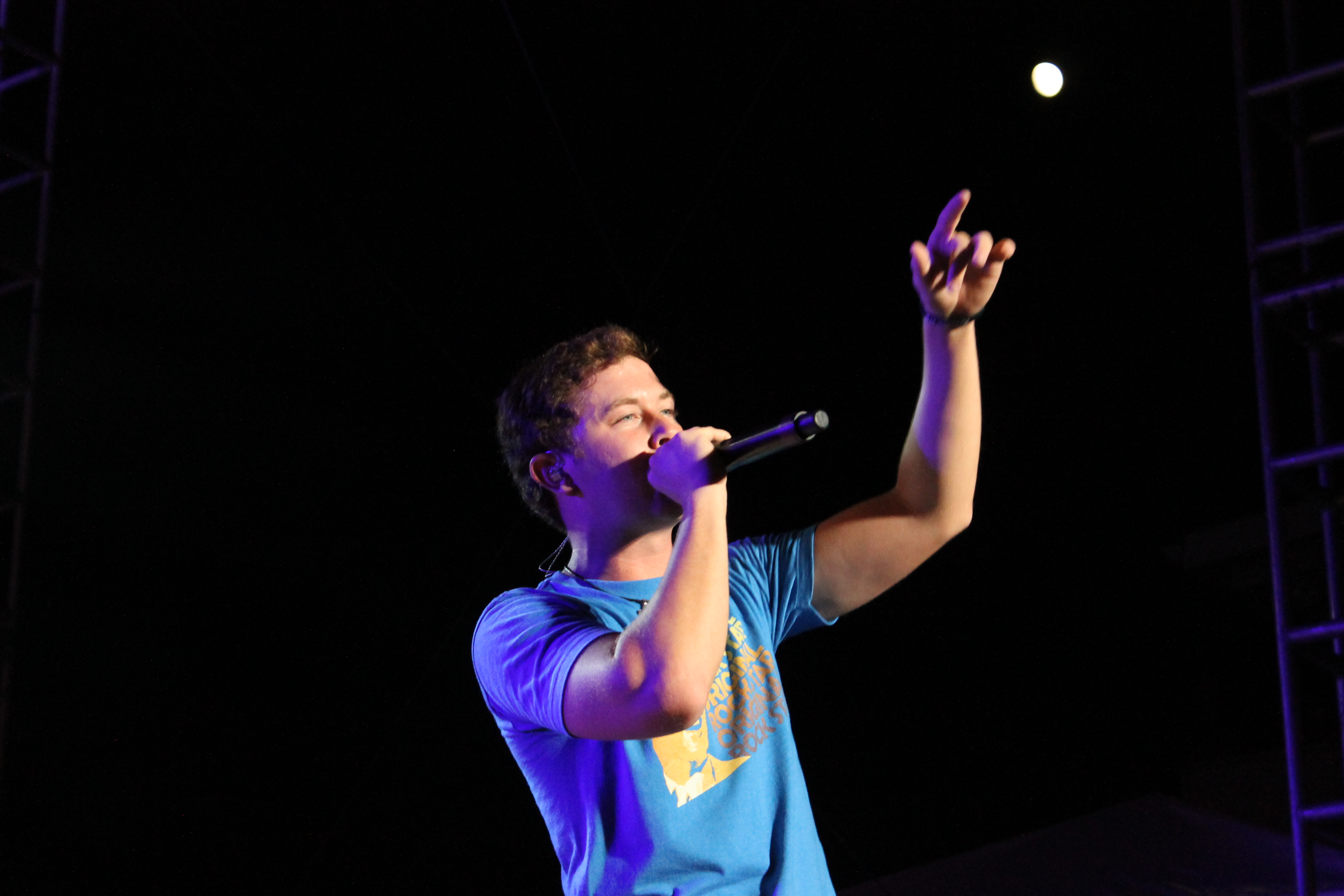 A crowd, mostly made up of young women, packed the Pepsi Grandstand as up-and-coming teen Kelsey K and American Idol star Scotty McCreery kicked off the 2014 Missouri State Fair in style.

Fair officials scraped mud from the track area and the weather cleared for the first concert at the Grandstand, despite ominous cloud coverage and brief sprinkles minutes before 15-year-old Kelsey K took the stage.

While there was no shortage of men in cowboy boots at the fair’s first show, the crowd was primarily teenage girls with their parents. There were a lot of signs held by members of the crowd, many aimed at McCreery’s looks, including a middle-aged woman who held a sign that read “Scotty is a Hotty” close to the front of the track.

Kelsey K took the stage at about 7:30 p.m. and got the crowd going. Although she played a short set, she had the crowd bobbing their heads and clapping along as she played mostly new material. Last year, she opened for Toby Keith and it was refreshing to have her back at the fair and seeing how much she’s progressed.

She writes a lot of her own music, and the teenagers in attendance seemed to appreciate someone their age on stage in front of them. Toward the middle of her set, an audience member yelled “I love you, Kelsey.” And she responded like any southern belle with an “Aw thank you, I love you too!”

She played with a new band this year, all recent graduates from the Belmont University School of Music in Nashville. She moved around the stage quite a bit and had the crowd clapping along to her music. About midway through her set, she slowed everything down for a song she played on piano titled “Wild Horses.”

While Kelsey K got the crowd ready, Scotty McCreery definitely brought the house down. As the lights dimmed and his band hit the stage, the Grandstand erupted in screams as the women in attendance swooned for the American Idol alum.

As McCreery hit the stage, the crowd was on their feet and screaming. The vocalist donned a multitude of guitars and moved around the stage quite a bit throughout the show. His band was everywhere as well. His guitarists and bass player were constantly side-by-side and at different parts of the set all members except the drummer were center stage and shoulder-to-shoulder, keeping the crowd in a frenzy.

Backstage before the show, about 50 fans made up of mostly young women had a meet and greet with McCreery. It really helped set the tone with most of the fans, including 2013 Miss Missouri State Fair Queen Ashley Bauer, coming through smiling and excited for him to hit the stage. A couple of the young women were star-struck and in tears as they made their way back to the seating area.

Early in his set, McCreery came down a wooden set of stairs to the track level and was immediately swarmed, signing autographs and shaking the hands of anyone that could reach. The composure and dedication to his fans was really impressive.

Between songs, McCreery talked to the crowd, giving some details of his life. He talked about the culture shock of moving from North Carolina to Los Angeles and about his time on American Idol, where he won the 10th season. It was actually quite humorous, as he related how people were telling him he needed to be more of a pop artist, and he gave the crowd a “rah-ah, ah, ah, ah” a la Lady Gaga to emphasize his point.

Musically, both artists were great. Both Kelsey K and McCreery seemed to be playing a bit jazzy. The way the electric guitar melded with acoustic and steel guitars made for a sound from both artists that was really enjoyable.

After her set, Kelsey K made her way to the merchandise booth for one of the most important parts of her performances, a meet and greet with more than 50 fans.

“I love meeting (my fans),” she said. “Getting to do that is the best thing ever. If they’re willing to come out and meet you and they want to meet you I love to do it and say thank you and take pictures. They’re a huge part of the team.

“When I meet them I really want to know them and get to know them. It is hard because you have a huge line and we have to go through it before the next act starts. I try my best to at least know their name or if they love music or get to know a little bit about them.”

She said meeting the younger fans has a lot of meaning to her personally.

“It was actually a lot of younger girls at the meet and greet. Which is cool because I love meeting fans my age who are either fans of the music or they love music or are inspired by you,” she said. “So, I feel like I’m in a cool position to be an inspiration to younger girls who have the same dream or just look up to you. It’s good to be in the position to be a good role model.”

The Iowa native also said she’s been mostly working on new music in Nashville. After playing a few more shows, including the Iowa State Fair and Kentucky State Fair, she plans on being in Nashville full-time with some new music to be released “hopefully later this year but probably next year” and then a tour to follow, that will probably include some more state fairs around the country.

Overall it was a good kick off to the Fair. McCreery played a brief cover of “Folsom Prison Blues,” which happens to be one of my favorite songs. The high energy show seemed like a successful kickoff to what is sure to be a great 10 days of concerts and fun at the State Fair.