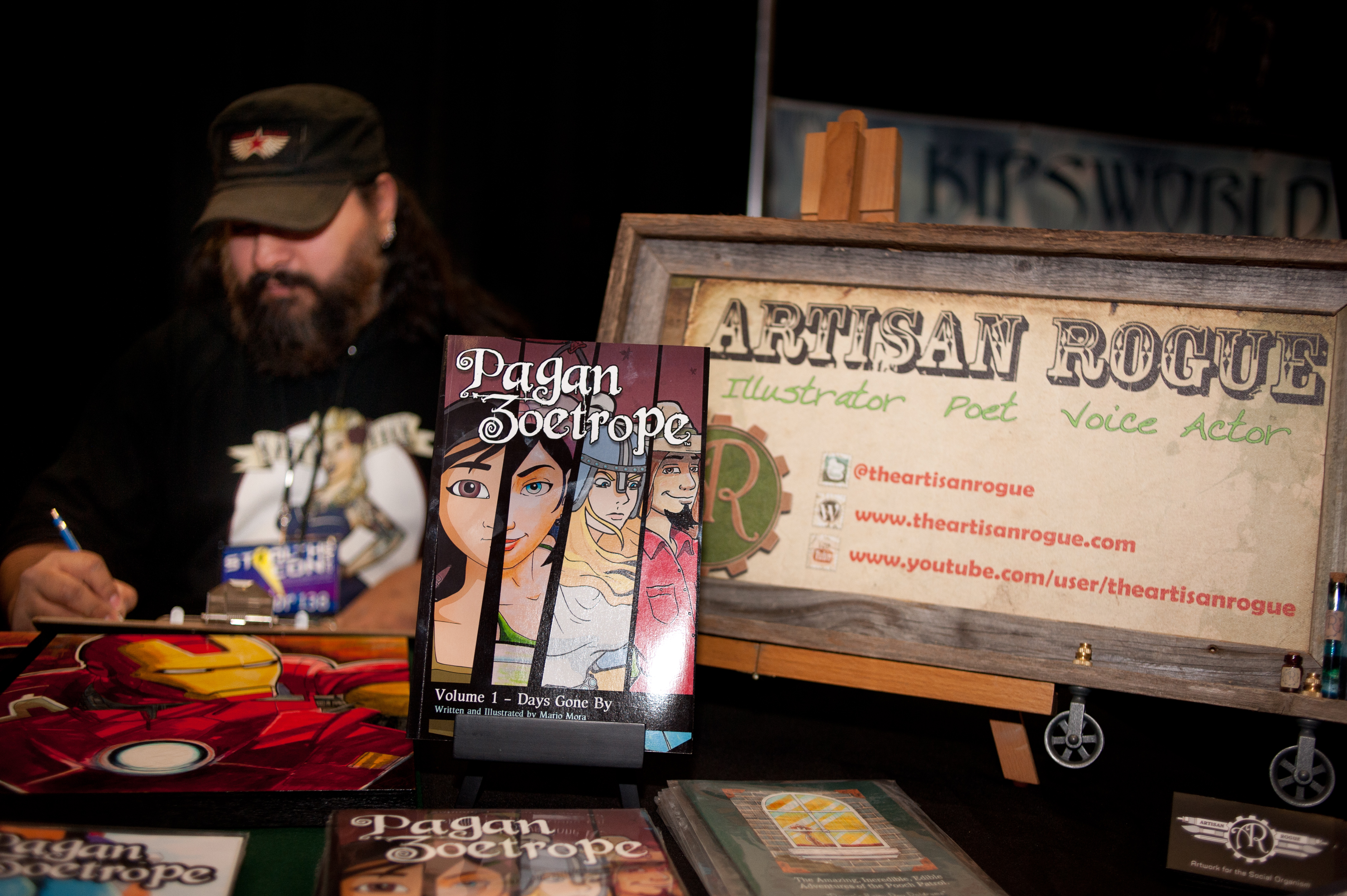 The first Stealth Con in Warrensburg, Mo. — although not nearly as big as the comic cons in Kansas City – was able to book some impressive guests and vendors for the showcase. Even with big names like Casper Van Dien, Ernie Hudson, and David Yost on the bill, there was one artist in particular who caught my attention. In addition to being one of the first booths from the entrance on the showcase floor, Mario Mora’s art drew me closer with his unique artwork. Using wood as his canvas and markers instead of paint, Mora’s artwork is very vibrant and crisp. Images of pop culture icons like Iron Man, War Machine, and Darth Maul, as well as some of his work from his own comics covered his table. I got the opportunity to sit down with the self-named Artisan Rouge, and I enjoyed every second of it.

He said he first got the idea for his art when he had some free wood panels, and he tried to see what happened when he used watercolor on them.

“(Using watercolor) was a little bit out of control, so I started utilizing markers,” he said. “It was a slow grind at it, and then all of a sudden, it happened and I liked it.”

He also said he prefers to use markers because he has experience as a comic artist. The process he describes shows a lot of patience – for his bigger pieces it takes around forty hours to complete. He describes his process by saying, “I’ll find some photo references to help put it together, and if it’s on wood I’ll use some light graphite drawing. I’ll sometimes scan it and do some color study, and I start to lay on colors on what I want and what I think will feel right.”

He uses acrylic markers or colored pencils for highlights and then uses alcohol to pull some of the marker out of the art to make a faded effect that smoothly transitions his colors.

When asked what advice he would give to anyone in the art field right now he responded by saying, “It’s going to sound cliché, but just don’t give up because I’ve been there. I about quit doing this about five years ago because I got frustrated. Everybody hits a frustration point, but every day you need to draw.”

Mora encourages people to work at everything and is very open about his experiences. When asked about what he would say if he could go back in time and give his younger self some advice, he responded:

“One, draw every day, and two, don’t sit on an idea. There’s never going to be that right time to jump into the industry.”

Through his blog, Mora posts updates about his successes but more importantly he posts his failures. He said he strongly believes that any failure is an opportunity to take something good out of it. Mora offered lot of insights and inspiration to everyone who stopped by and sitting down with him for the ten to fifteen minutes that I did was rewarding, and I learned he is a very respectful and all around great person. He demonstrated that being humble is the best way to live life. Art students would be wise to follow his advice.

For more on Mora, his Twitter handle is @theartisanrogue. Check out his YouTube channel here. And more info, including his blog, can be found via his website here.