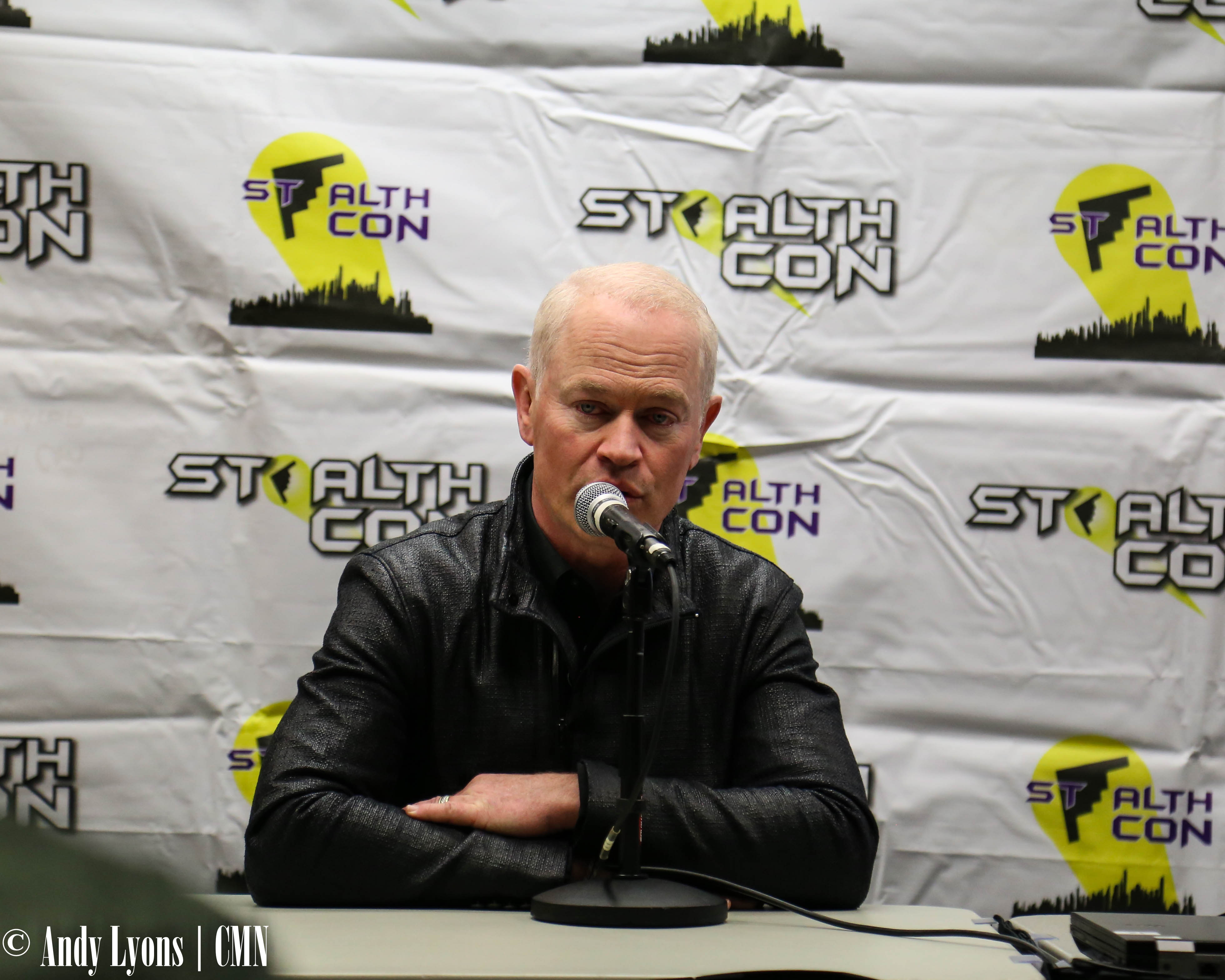 Fans were treated to a tell-all panel with celebrity guest Neal McDonough at Stealth Con last weekend, as the star opened up to questions for nearly an hour. McDonough, whose recent run as Damien Darhk on The CW’s “Arrow” and “Legends of Tomorrow” has catapulted him to a household name, took the time to answer anything a fan had for him – from generic “how did you get into acting?” to in depth questions about the different roles he has played since his career started in the early ‘90s.

McDonough, who’s most famous character is Buck Compton in the series “Band of Brothers,” didn’t hold back from delving into his career. He talked everything from struggles to how his faith and family have impacted his career as well as what it was like having breakfast with Sir Anthony Hopkins while filming “Red 2.”

He opened the Q&A session with an answer to how he got started in acting with a narrative about how when he was six years old his older brothers said “make us laugh or we’ll beat you up” and that got him started. After developing a love for making his brothers laugh, he never got a speaking part through grade school. In ninth grade, he surprised his teacher with a part as Snoopy in a Charlie Brown play.

He repeatedly touched on his time as Damien Darhk on the CW’s “Arrow” and “Legends of Tomorrow” series based on DC Comic’s characters. He compared the two, noting how the character evolved from a dark and scary villain to a bit more fun as he shifted from Oliver Queen’s nemesis in the fourth season of “Arrow” to a part of the crew in seasons two and three of “Legends.”

“The last episode is this week, (he) almost became a good guy by the end of the season,” McDonough said of playing Damien Dahrk. “So it was really fun arc and a fun journey these last three years.”

When asked if he prefers playing good guys or bad guys, McDonough playfully answered “yes.” But he has a family-driven motive when it comes to playing the bad guys he has become so well known for.

“I play so many bad guys because I don’t have to kiss any women or have any sex scenes of any sort,” he explained. “And that’s just by design. I love acting so I had to figure how can I stay in this business and make a great living for my family. I did ‘Walking Tall,’ I was like ‘ah this is it! I’m really good at playing the villain.”

McDonough said he had given up on acting and in the late ‘90s his parts had dried up and he wasn’t making a great living at it so he was considering going home to Cape Cod and taking over the family business when a friend called him and said Steven Spielberg was looking for him to audition for a part.

He said he spent his last $600 to fly to Los Angeles and ended up reading his part with Tom Hanks and it took all the nervousness from McDonough. He continued his story, mentioning how he prepped to play Buck Compton while sleeping on the closet floor at a friend’s house – and nailed his audition with Tom Hanks.

The final audition was with about 30 guys and McDonough had tickets to a Lakers game so he was trying to not miss out. Speilberg was a part of the audition and finally gave his part and went to the game with his friend at the Staples Center, but he realized he had forgotten something.

“I go to my buddy, and we are literally in the cheapest seats at the Staples Center, and tell him I have to get down to the floor and introduce myself to Steven because I didn’t say hi at the audition today,” McDonough said.

After making his way to the bottom floor he said he was star struck at all the celebrities walking by and he ran into the head of security who was 6’9” and tells him he has to meet Speilberg and the guy says “I loved you in ‘Star Trek: First Contact.’” McDonough said he told the truth about his audition and was given the chance to meet Speilberg and was told “I’m gonna see you again real soon.” And because of “Band of Brothers” McDonough was granted a lot of opportunities and he had a bit of advice for people looking to make a change.

“And if it weren’t for me going out that day..” he continued, getting choked up. “If I didn’t show my.. If I didn’t show my confidence that day, happens every time, I wouldn’t have met my best friend. So much for being a bad guy.”

McDonough hit all sorts of topics from fans, from his religious view with God, morals, and faith and interacting between his job and his family life. He admitted Dum Dum Dugan from “Agents of S.H.I.E.L.D.” and “Agent Carter” was one of his favorite characters. 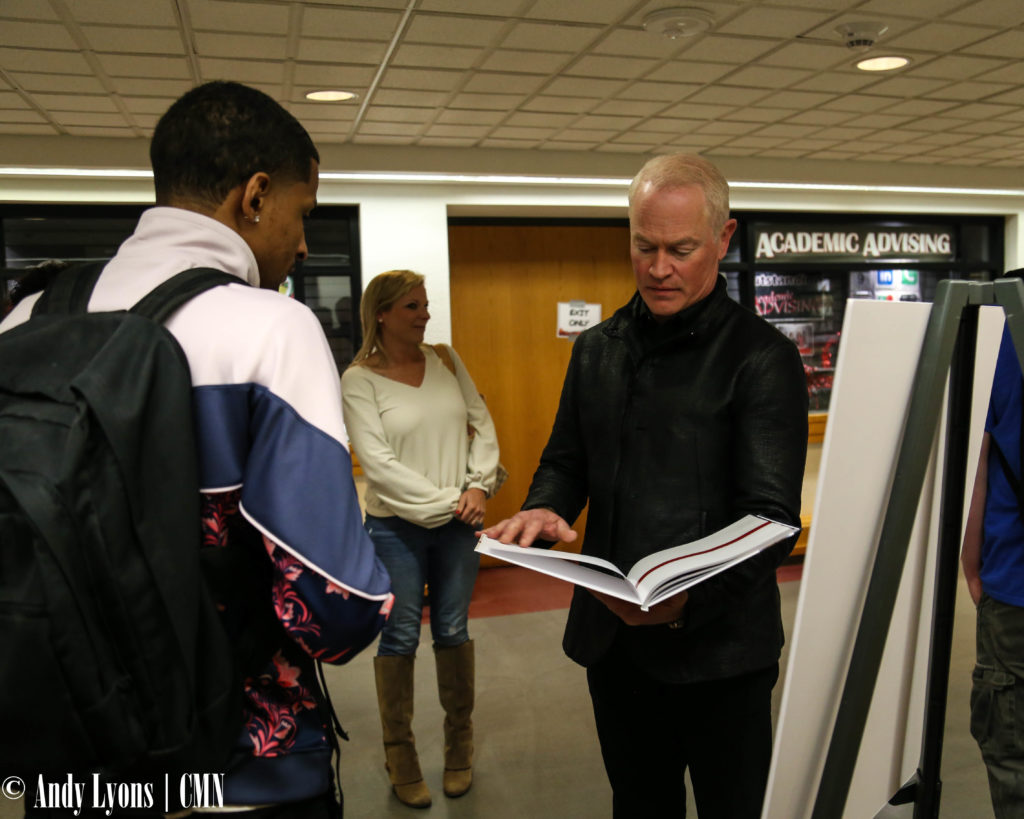 Neal McDonough chats with a fan who presented him with a copy of his original graphic novel at Stealth Con.

Near the end of the session, a fan asked a two part question, including if McDonough would look at his graphic novel. Having the confidence and talent McDonough had talked about earlier in the session held true, and McDonough accepted the fan’s graphic novel and had him write his contact information in it for a future conversation.

McDonough will appear in a new series titled “Blue Book” coming to the History Channel this fall. He described the series as set in 1952, focusing on UFOs and a government cover-up where he will, of course, be playing the bad guy.