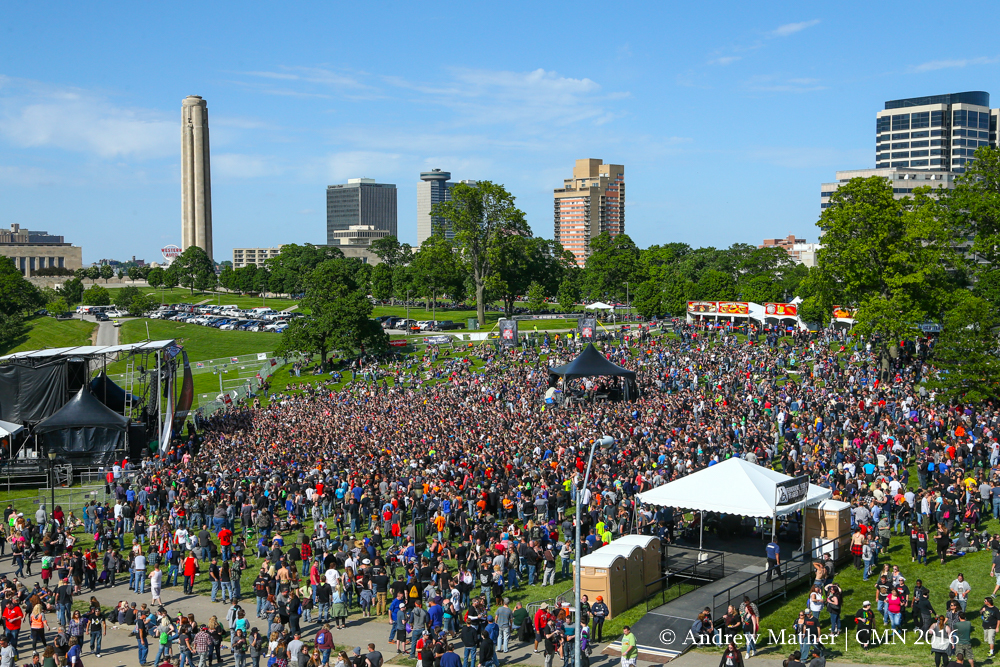 Fans descended by the thousands on Liberty Memorial Saturday for the 24th annual Rockfest, the largest one-day rock festival in the United States. Hosted by Kansas City rock radio station 98.9 FM The Rock, this year’s show was the first year in recent memory where there wasn’t ankle deep mud or blistering heat for the show featuring 20 bands and three stages.

The crowd was notably mellower this year. It didn’t seem quite as crowded in front of the three stages and the fans didn’t seem as rambunctious or into the bands as previous years. Outside of a fist fight – that security personnel watched instead of breaking up – the crowd never really culminated into the rowdy, moshing crew Rockfest has been known to have.

The music got started at the Worth Harley Davidson Stage with up-and-coming rockers Veer Union. By their third song, the crowd was starting to warm up. A cover of Faith No More’s hit song “Epic” had the crowd singing along. Second band on the stage Like A Storm took it to the next level. The band had a groovy rhythm to their sound and their set culminated with a metal cover of Coolio’s “Gangsta’s Paradise” followed by a didgeridoo solo.
Over at the main stage, rock legend Nikki Sixx introduced Sixx A.M. guitarist DJ Ashba, who played the National Anthem. Following was Saint Asonia, who fell flat. The band features former Three Days Grace frontman Adam Gontier and Staind guitarist Mike Mushok. The band’s set consisted heavily of covers of the duo’s former bands, and the crowd seemed relatively bored with the set.

Pop Evil hit the stage and the crowd went ballistic. They were the first in a line of bands throughout the middle of the day that had fans fist pumping and moshing and thoroughly enjoying themselves. Sevendust, Drowning Pool, Trivium and Ghost all had the crowd going crazy with their heavier sound.

As the sun was setting and the temperature dropped, Seether’s set – which was full of technical difficulties – seemed to put the crowd back in their mellow, sleep-like state. Beyond the fans closest to the stage, no one seemed into the show.

Rockfest 2016 was a very different show than previous years. It wasn’t necessarily better or worse, but definitely different. It seemed as though most of the fans in attendance were paying attention but had no reaction to many of the bands throughout the day. The middle of the lineup on both stages was really strong but technical difficulties for Seether and Hellyeah seemed to tone the crowd down a bit further. Fans didn’t have their phones out for most of the day either.

The lacking insanity could have been because of what some say was a weaker lineup in previous years, as rumors swirled that Entercom was holding out on renewing 98.9 morning radio host Johnny Dare’s contract because of low ticket sales. It seems as if some sort of paradigm shift has led to a more mellow festival instead of the typical rowdy, fist-pumping insanity that is so typical of Rockfest.