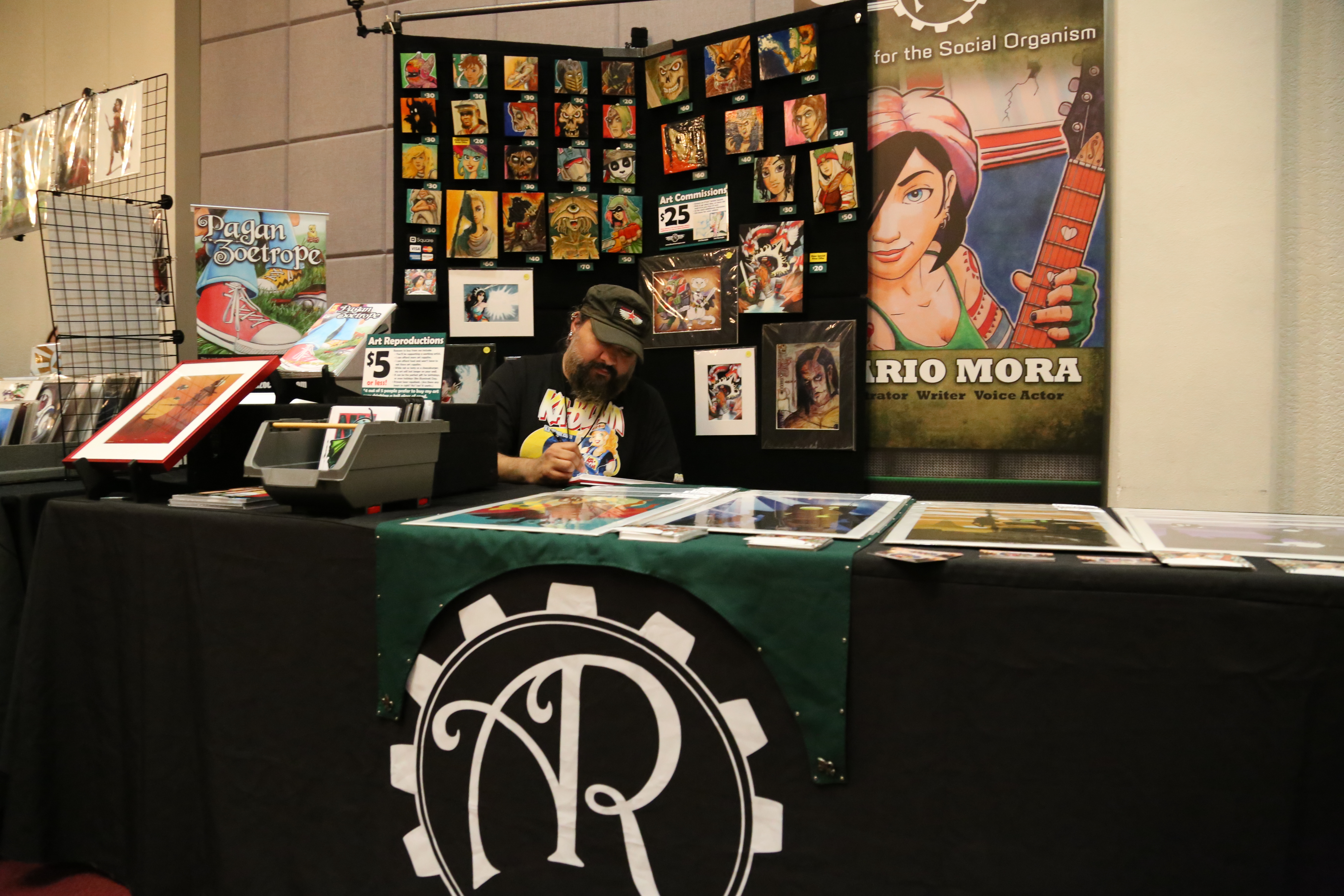 Mora’s primary work is portraits of pop culture icons on wood. Changing his approach to how he utilizes wood for art, Mora has been able to redefine his own work. On top of that, he was able to reveal some of his new work, which utilizes the vector look, allowing for crisp and cleaning outlines, an art form that has been growing in popularity in recent years.

Mora said the inspiration for his new art style comes from how popular the medium is.

“It’s huge in advertising,” he said. “A lot of it comes from the iconography and simplistic shapes and color patterns that people can recognize. It was honestly an offshoot of a video game project that I was working on. I found myself not treating every line as precious because I knew I could go back and experiment more.”

He said his video game project wasn’t meant to be anything other than a passion project, as it started as a technical exercise.

“Like with anything I get into I started to tell a story and asked, ‘Well what if the character look like this?’” Mora continued. “There are just some stories that I cannot tell in comic form and a video game might be the next aspect of it.”

During a break from manning his 2017 Steath Con booth Saturday, Mora told CMN he’s been getting more inquiries since the inaugural Steath Con last year.

“I had actually gotten some phone calls from (radio station) KKFI … and I was getting questions from parents in regards to what their kids can do to start learning, which prompted me in a whole different direction in which I was seeking stuff to do, and one of the things I came across was a program called Young Rembrandts, which teaches younger kids how to do art,” Mora said.

Mora said he is a mentor with Young Rembrandts, a national program that offers a series of art courses that take place over the span of six weeks.

“What we teach is anything from rudimentary perspective to using design elements like shape, form, color, texture and pattern and instruct these kids on how to work together and celebrate the medium,” Mora explained. “It’s not structures in a way where expect a particular outcome for it, but it does turn into something where the kid can get some expression out of it.”

With art seemingly thrown on the backburner for many people and organizations, as shown in recent federal budget cut proposals, Mora said that kind of mentality shouldn’t be promoted.

“We are consistently inundated by it,” Mora said. “You go to the grocery store and you’re assaulted by it through graphic design. If you are at a library it’s on the books, it’s on television, it’s literally all around you. It’s necessary at an early age because before kids can even form words they’re choosing colors, they’re gravitating towards it.

“The movie ‘The Color Purple’ wouldn’t have been made if it hadn’t been for direct funding that came from the National Endowment for the Arts,” he added. “I understand that a lot of people would say ‘Well, that’s something that is a little elitist because it gives grants to higher end projects,’ but those projects are directly related to the maneuvering and funding of more localized projects.”

Mora offered some advice to those struggling in the art industry, noting that artists should stay true to themselves rather than try to please others.

“Stick with your art and understanding that you must be you,” he advised. “You cannot be the next Picasso, you can only be who you are, and the sooner you realize this, the stronger your art will become. I was pushed by one of my professors, John Lynch, who said that no one can be a one-trick pony and that you have to keep evolving your art.”