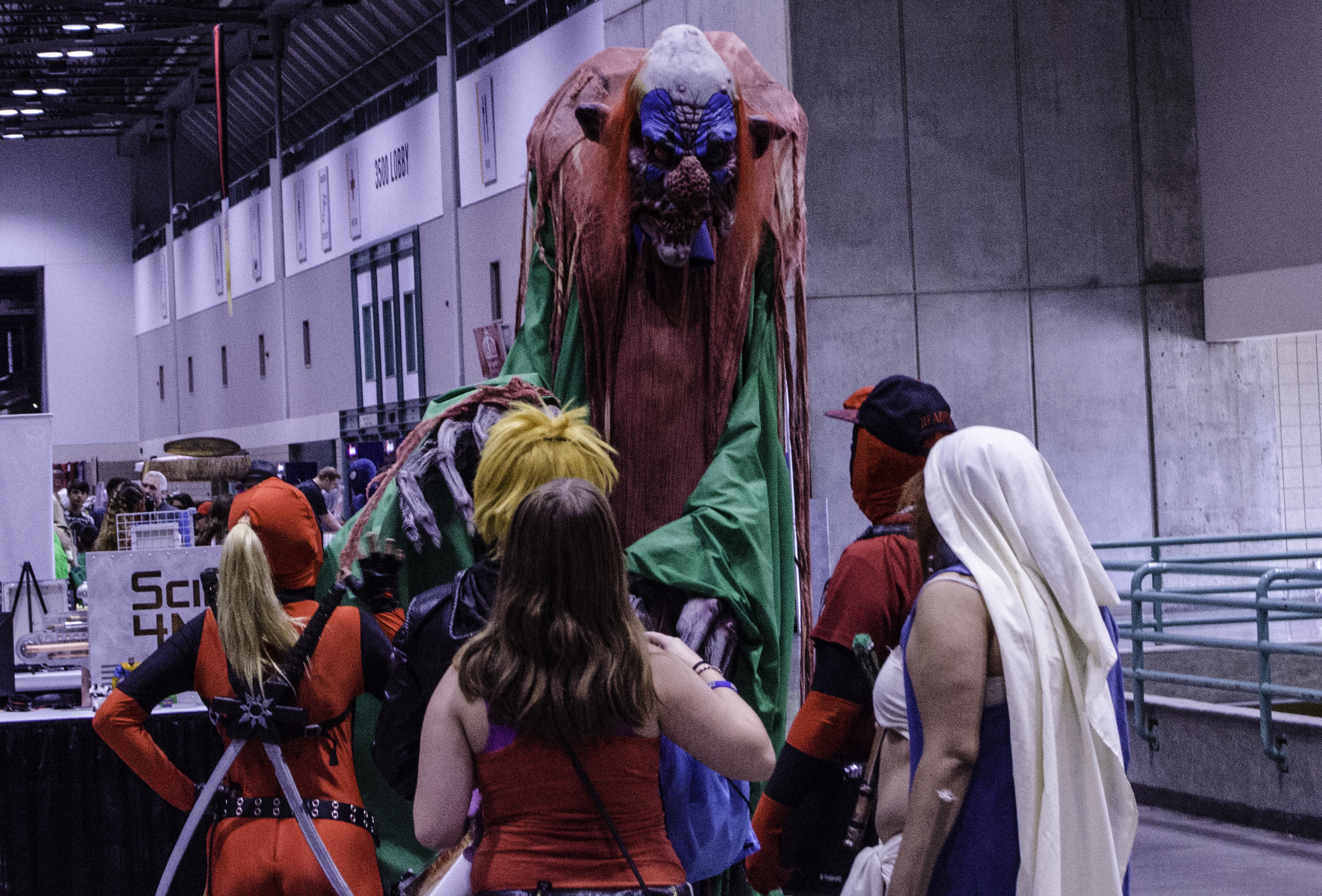 They were everywhere – in the conference rooms, on the main showroom floor, everywhere! Their appearances showcased a spectrum of colors: red, blue, purple, green, every shade in the rainbow. They came in a variety of sizes and ages. They were cosplayers, and on the weekend of Aug. 12, Bartle Hall became their domain. I felt electric upon arriving. At Kansas City Comic Con, I felt as if I had been teleported to another dimension. At every turn, I saw people dressed as characters from anime, comic books and video games. Superman, Supergirl, Batman, Deadpool and a plethora of young ladies dressed as Harley Quinn. I even spotted one creative individual rocking the black suited Spider Man outfit from Marvel’s “Secret Wars” series of the ’80s.

I was awed seeing legions of cosplayers, thinking about the creativity, time and money that goes into such elaborate creations, seeing works that rival Hollywood movies. It was such a surreal sight, bordering on sensory overload.

I felt under-dressed, but not unwelcome. As I strolled through the aisles of vendors, I heard a piercing voice ask “Why do people do this?” The question was asked by one plain clothes attendee to another. It should have been asked of a cosplayer. If you aren’t a part of a sub-culture, the most reliable information on it from comes from those who are. When a sub-culture scene is one that is maligned or misunderstood, direct information can clear up misconceptions.

Wanting to know more about various aspects of cosplay led me to a panel on social media and cosplay at the convention on Saturday. Two known guest cosplayers sat on the panel, Sophii Jones of Ultra Girls Cosplay, based in Wichita, Kan., and Rae from Super Sirens, based in Kansas City, Mo. Both panelists spoke of highs and lows of doing the cosplay thing online. Jones spoke to the positives of a nationwide and global connectedness for cosplayers via the internet.

“It’s helped me connect with cosplayers across the country or across the world,” Jones said

If the positive effect of social media on cosplay is a sense of community and connectedness, the negative is online insults, or “bashing” as Rae called it. Rae related how sharing a photo of a cosplay she had done as Princess Peach from the “Super Mario Bros.” video games got a fair share of backlash after she posted it in an online group.

“It got called a boobie picture, and that really hurt,” Rae said. “Because I spent 17-18 hours on the corset alone.”

Rae said she has received flack for using Patreon, an online crowdfunder similar to Go Fund Me, in which fans of the Super Sirens are able to donate, with the proceeds going to materials used for their cosplay and other expenses.

Rae said she believes Pateron is another way to build connectedness with her fans.

“I’m a big believer in playing to my fans, you get something in return,” Rae said. “I tell people where every dollar goes.”

Rae is able to give back to her fans by taking requests for cosplay themes, and prints and exclusive items are sent out based on the amount donated. Other Kansas City cosplayers use a super hero persona to give back to those in need.

Jessica Porter, known in the KC area as Elite Supergirl, is a caped philanthropist.

“I’ve been volunteering, doing charity work for about the past 8 or 9 years as Supergirl,” Porter said.“It started with Planet Comicon, and it blossomed into a super relationship with Children’s Mercy Hospital.”

Coleman is known for doing his own “Ghostbusters” character. The look is inspired by the movie but with his own twist. He’s not cosplaying Ray or Egon. “Panda” is something like the missing fifth Ghostbuster. Coleman was serving in the Air Force, stationed at Whiteman Air Force Base in Knob Noster, Mo. After transitioning back into the civilian world, he was looking at a flight suit when he was struck with the idea for his “Ghostbusters” themed character. He talked about the reaction he gets when volunteering at hospitals.

Jones spoke to an aspect of cosplay in which an emotional reward is provided. She said doing cosplay has helped people out of depression and anxiety.

“It’s just this fabulous world that anybody can be a part of,” Jones said.