LATEST NEWS
10:13 PM
Home Entertainment REVIEW: The Damned: Don’t You Wish That We Were Dead 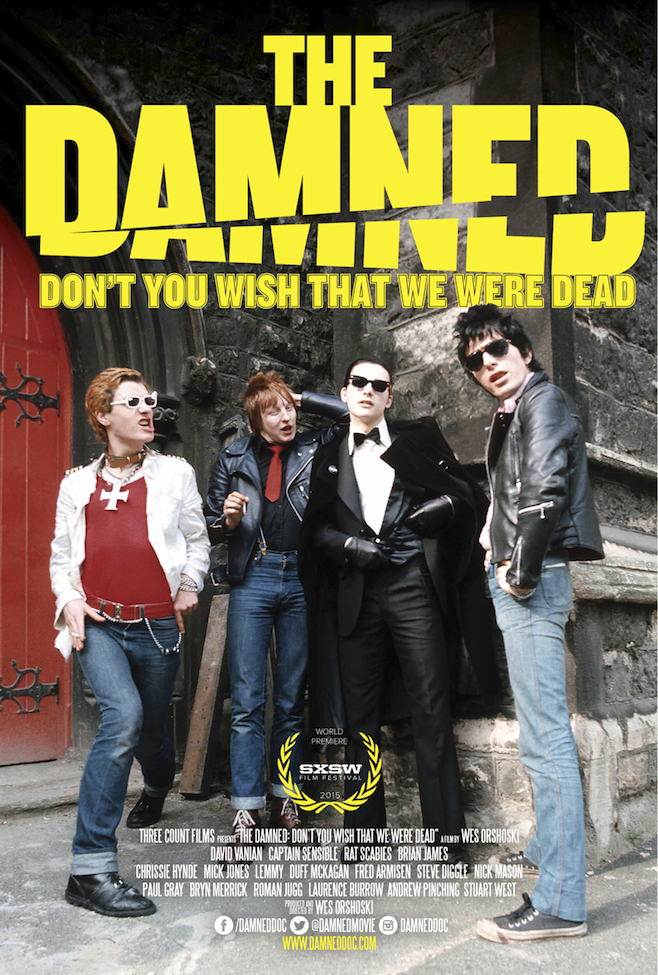 REVIEW: The Damned: Don’t You Wish That We Were Dead

A question of why some bands gain major recognition while others don’t is a re-occurring theme in “Don’t You Wish That We Were Dead.” The film starts with rows of punk rock fans in line at the 2013 Punk Rock Bowling festival in Las Vegas being asked how much do they know about the Damned. The responses were mixed – some of those interviewed were able to extrapolate on the significance of the Damned, and others were left baffled.

The question of who are the Damned is easy to answer. They were one of the first generation British punk bands, with an original lineup of Dave Vanian on vocals, Captain Sensible, starting out on bass and later moving to lead guitar, Rat Scabies on drums and Brian James on guitar. The question of why the Damned are not as revered or referenced as often as the Clash and the Sex Pistols is a little trickier to answer.

Early in the film, while reflecting on the band’s early days Don Letts, legendary eclectic reggae DJ, explained what separated the Damned from other British punk bands. He opined on how the Damned’s take on three-chord rebellion was not attached to any specific political stance, but that they came to party and could rock the house. He also noted that the Damned’s stage show and persona was wrapped up in vaudevillian theatrics. They were the fun punk band.

Vanian explains that the Damned were providing a form of fun escapism and that simply being in a punk band in 1970s England was a form of cultural rebellion. About a quarter of the way into the film, a fractured friendship among band members became the crux of the story.

The split was right down the middle, with Vanian and Captain Sensible in one corner and James and Rat Scabies in the other. The plot of the movie moves through various lineups, from break-ups to re-groupings. An acrimonious split between a reunited lineup in the early ’90s led to irreconcilable differences, which eventually resulted in two separate camps performing the Damned’s songs live.

Captain Sensible and Vanian regrouped, enlisting additional hired guns. Much of the film captures life on the tour, from California to Japan to back to the U.K. The viewer gets a glimpse of the psychology of the members, ranging from the duality of Captain Sensible and his dance in between his stage persona and his everyday life as Ray Burns to why lead-singer Vanian is personally disengaged from the band but still able to perform.

At the other other side of the divide is Rat Scabies and original guitarist James. James seems indifferent about the split between the two factions, but Rat Scabies comes across as downright bitter. He breaks down into tears in one interview segment. In another, he sardonically barks at the camera, stating he doesn’t care about the documentary being made. The footage of Rat Scabies and James doing a gig in France with Texas Terri (of Texas Terri & the Stiff Ones) on vocals amounts to an audio abortion,. All of the Damned’s songs have Vanian’s vocals on them. Even with half of the classic Damned lineup playing, the crucial ingredient of Vanian’s vocals is missing.

After examining the interpersonal drama, the film’s focus shifts back to life on the road and a lack of commercial success. Current Damned drummer Andy “Pinch” Pinching theorizes that the reason might be due to putting out music and that was not considered commercially viable and doing things their own way.

Vanian and Captain Sensible have stayed the course, not letting the so-called “curse of the Damned” dampen their spirits. A backstage conversation about why their music has never been used in a car commercial and that of some of their punk peers has quickly shifts from airing a grievance to joking about the matter.

As the movie draws to a close, Jack Grisham, lead singer of punk band T.S.O.L., declares he doesn’t care if the guy next door has never heard them. That doesn’t diminish his love of the Damned. Much of the interview footage conveys a fan love of the Damned. Numerous musicians is interviewed including the late Lemmy Kilmister of Motorhead, Dexter Holland of the Offspring and the Pretender’s Chrissy Hynde. They each throw in their two cents concerning the Damned’s lasting impact. The audience walks away with the idea that musical talent does not always translate to commercial success, something that’s really a given for punk fans.

This documentary gives the Damned their proper credit and then some, treating the band as a whole chapter rather than a footnote.