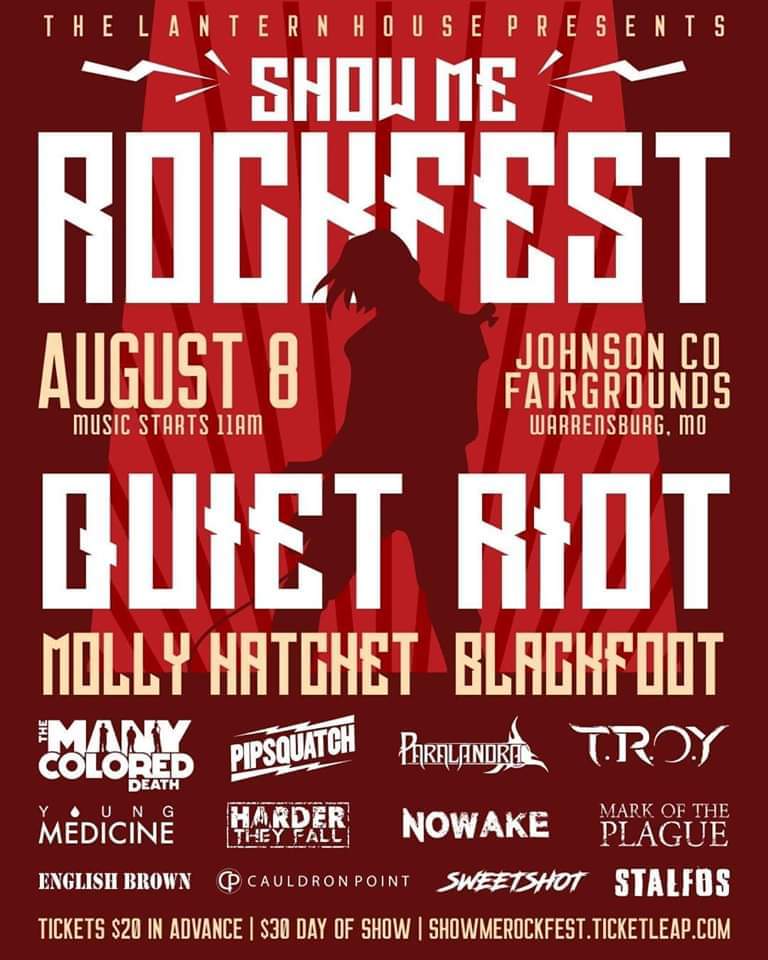 Concerts and festivals across the U.S. have been canceled amid the coronavirus pandemic. However, one promoter is pushing forward with his plan to bring a big show to west central Missouri.

Show Me Rockfest is coming to the Johnson County Missouri Fairgrounds on Aug. 8 featuring Blackfoot, Molly Hatchet and Quiet Riot as headliners.

The event will also feature bands from across Missouri including English Brown, Cauldron Point, Sweetshot, Stalfos, Mark of the Plague, NOWAKE, Harder They Fall, Young Medicine, The Many Colored Death, Pipsquatch, Paralandra, and T.R.O.Y.

Promoter Craig Chamberlain grew up and graduated from high school in the small town of Hughesville, Mo. He said he wanted to bring music back to the area where he grew up and give smaller bands an opportunity they may not have otherwise. Chamberlain sat down with CMN recently to discuss organizing the show despite having to push back from the original date and location of May 23 at the Missouri State Fairgrounds in Sedalia, Mo.

“There’s such a rich history of music in this area that people don’t even realize,” he said. “From Slater, Missouri, Steve McQueen. You’ve got all the ragtime stuff here in Sedalia. There’s local artists around here that people don’t know who they are because nobody’s heard them. And I wanted to give people a chance to hear some of these bands from Sedalia that if I didn’t have a show like this they’d never know who they were.”

Chamberlain said it was important to try and bring in bands locally from Pettis County and around Missouri to fit the bill. After listening to the music of the headliners, he checked out more than 100 bands to put the lineup together and feature bands such as NOWAKE from Hannibal, Mo., and Paralandra from Springfield, Mo.

Chamberlain said Bret Michaels was the original headliner until he signed on to tour with Def Leppard, Motley Crue, Poison and Joan Jett in the now canceled reunion tour. After some other potential headliners fell through, Chamberlain made a phone call and Ashley Talent International out of North Carolina presented the current ticket with Blackfoot, Molly Hatchet and Quiet Riot.

Chamberlain said his plan is to host a two-day Rockfest every Memorial Day weekend, and this year’s festival was supposed to be the kickoff to that.

Show Me Rockfest was originally scheduled for May 23. About 30 days prior, Chamberlain got a call that the Missouri State Fairgrounds would be closed until a later date due to the pandemic. While trying to decide whether he should just cancel the show until next year or push off the date, he said he called Ashley Talent and they told him Frankie Banali, the original drummer for Quiet Riot, has stage 4 pancreatic cancer and he didn’t want to cancel any shows. The agency gave him three dates the band was available so Chamberlain got in touch with the Fairgrounds staff; they couldn’t do any of the dates.

Chamberlain started looking for a plan B, even calling people with big properties to potentially host the show in a field a la Woodstock. After having no luck, it was suggested he call the Johnson County Fairgrounds. They were interested in hosting shows such as this, and after checking out the venue and getting in touch with Quiet Riot’s management, the new date was set.

While the Johnson County Fairgrounds can hold around 11,000 people, Chamberlain decided to limit ticket sales to 5,000 out of health concerns due to the coronavirus pandemic.

“There’s gonna be people that don’t want to be packed in there like sardines,” he said. “If they want to stay back a little bit that’ll give them plenty of room to do that. We’re gonna have extra hand sanitizing stations, there won’t be any meet and greets.

“I feel like our summer has been stolen from us. Is this serious? Absolutely. But we have to live our life. And people have been cooped up and they’re ready to get out and party.”

Despite having to move venues, Chamberlain is planning to auction off three guitars signed by all three headliners. The proceeds will be donated to Sedalia-area charities DeFeet.org, Community Santa, and another to-be-determined charity.

Chamberlain said gates open at 10 a.m., music starts at 11 and goes until midnight. There are plans for a pre-party Friday night at the Fairgrounds and anyone with a ticket to the Saturday show will be allowed in. Friday night festivities will include performances from two or three bands who were unavailable Saturday as well as a poker tournament and cornhole tournament.

Other amenities will include local craft vendors and an open cooling station. The military will have some vehicles set up and there will be a salute to veterans and first responders during the day. There will also be an auction for a 2020 Kawasaki Vulcan custom motorcycle that will be driven on stage before Quiet Riot for the announcement and Chamberlain said the winner can drive it home.

Show Me Rockfest will be hosted Aug. 8 at the Johnson County Missouri Fairgrounds. Tickets are available at Backwoods Guitar in Sedalia and Holiday Inn Express in Warrensburg with more outlets coming soon. Tickets are also available at showmerockfest.ticketleap.com. Follow the Facebook event for the show here. Listen to our interview with Craig Chamberlain in its entirety below via SoundCloud.